Pushing Through Fear with Darryl Bellamy of Bellamy Inspires

You must push through your fear.

Darryl Bellamy wants to find out. {Continued below} 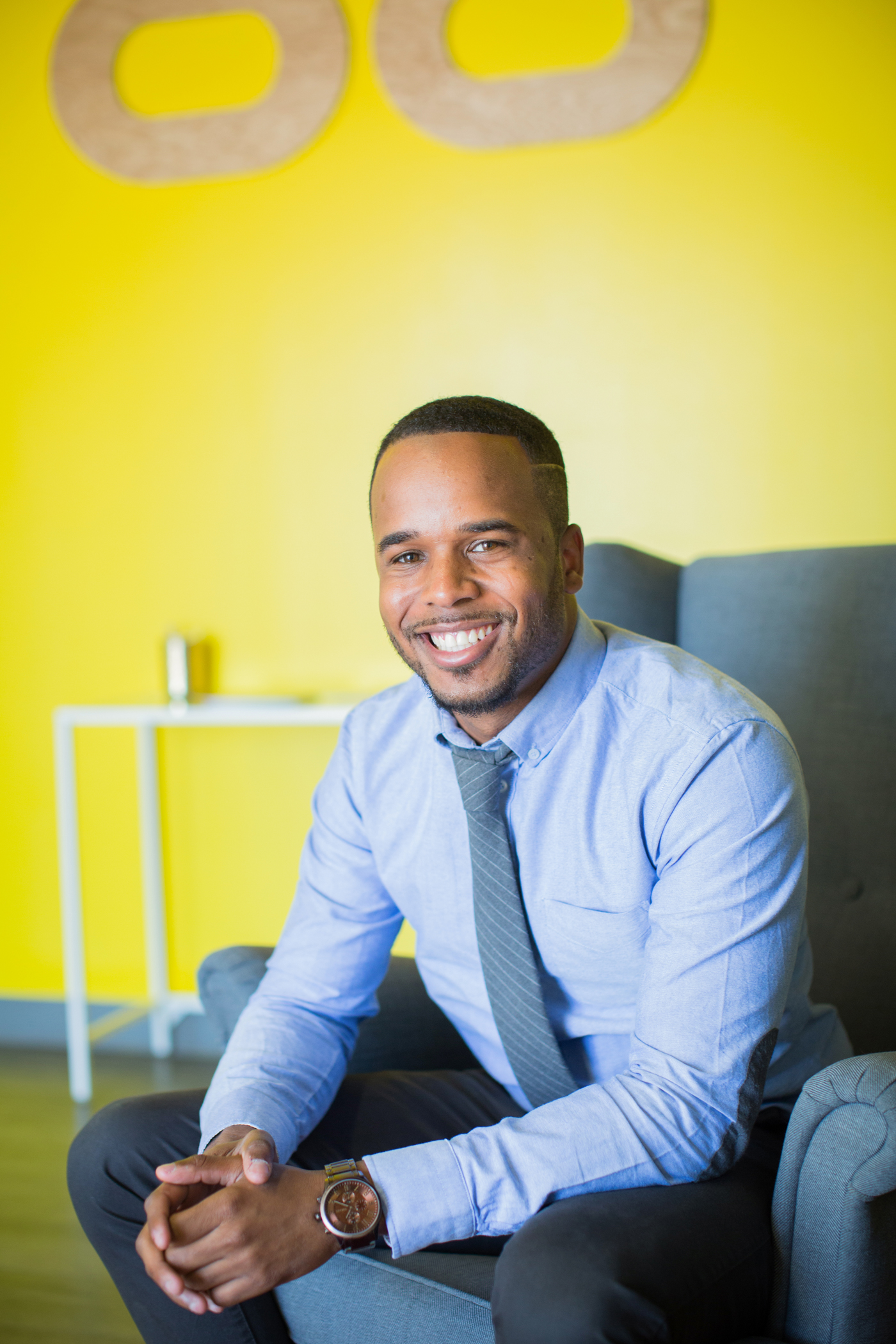 As Founder of Bellamy Inspires, Darryl Bellamy takes that key phrase one step further: You must push through fear to become whom you want to be an reach heights you’ve never reached before.

And he’s known nationally for sharing that key phrase with thousands of high school and college students.

A graduate of the University of North Carolina at Charlotte with a degree in Business Management, today Bellamy is a self-professed Corporate America dropout, Author of Waking Up Chase, and professional speaker.

“I knew that I always wanted to be an entrepreneur,” he said. “I just wasn’t sure how to get there.”

The career he knows today started approximately two years ago.

Working for a consulting company, Bellamy felt ‘pretty satisfied’ with his life and career – a seven on a scale from one to 10, 10 serving as most satisfied.

So, he Googled ‘life coach’ and found a coach who also worked as a full-time speaker and author. It sparked Bellamy’s interest in public speaking. He started attending National Speakers Association meetings, networking with speakers, engaging with mentors.

“The next year, I quit my job to do this full-time,” he shared.

The experience tapped into something Bellamy knew about himself and the career he wanted.

“I knew that I always wanted to be an entrepreneur,” he said. “I just wasn’t sure how to get there.”

He felt that entrepreneurial drive earlier in his career. As a student at UNCC, he started Kollege Koncierge – a program designed to support freshmen students with the transition into college life. He needed 100 families to sign up to make it a career. One family signed up. He pursued Corporate America, but kept a pulse on developing a career that allowed him to help support the next generation of students and student leaders. 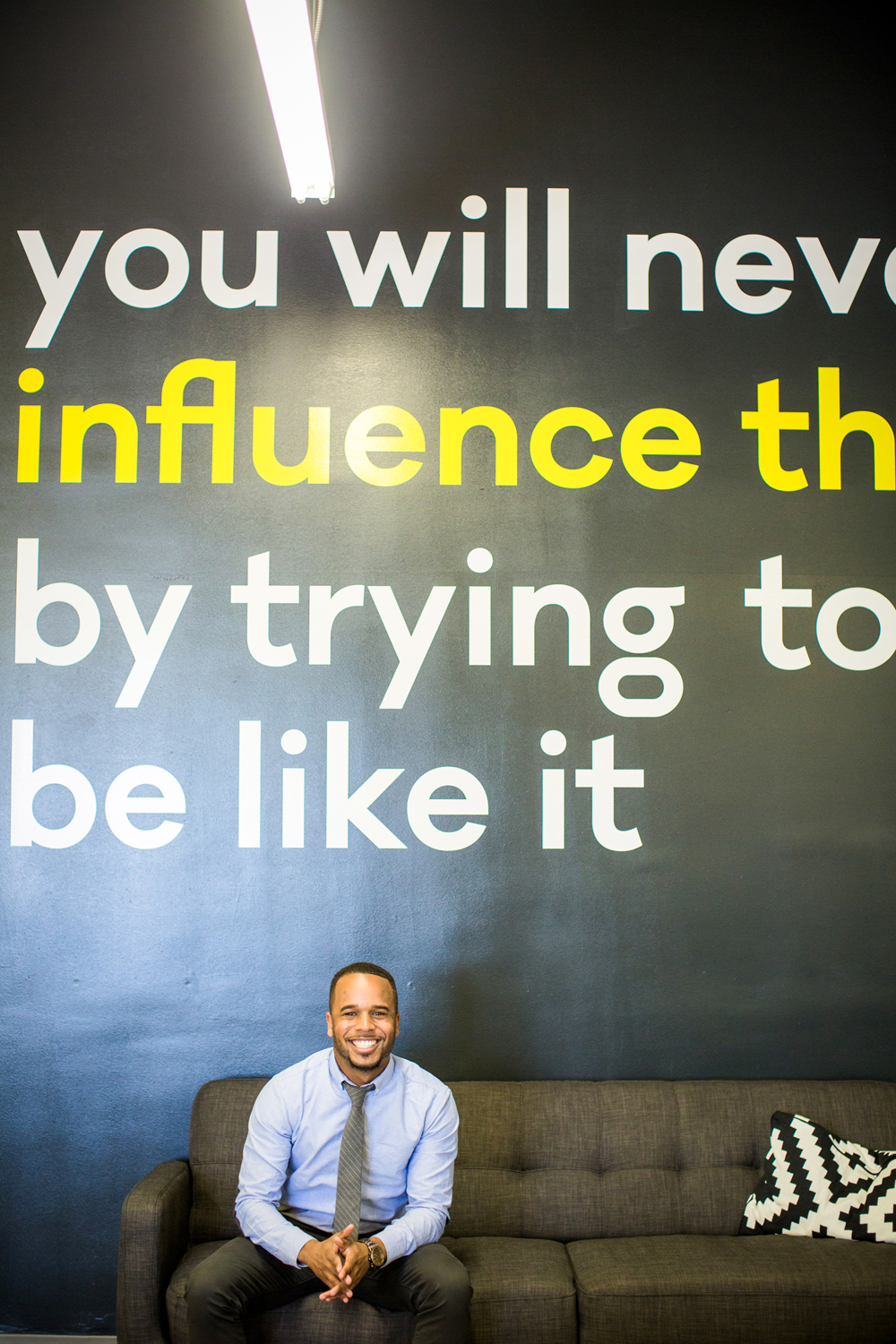 “The best part of Hygge is being able to throw ideas off my coworking co-workers,” 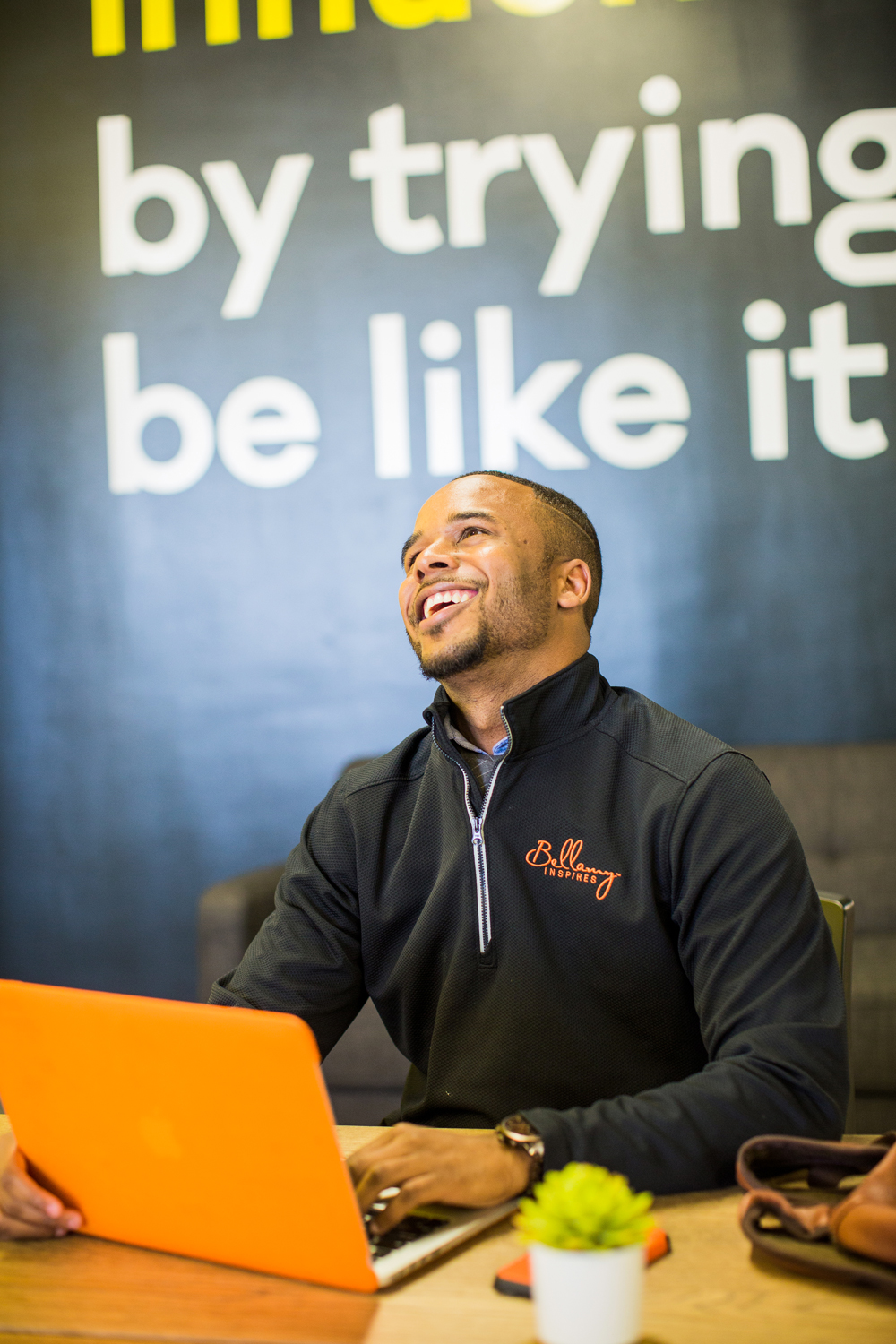 “For me, it was always about trying to get back to students,” he shared. “I knew that was the space I wanted to be in professionally.”

Bellamy’s business – and track record of success – is growing quickly.

“It’s an evolving thing,” he said. “Every day, you find out more things about yourself.”

One of those things that he’s figured out along the way is that he needed and wanted to be surrounded by people.

“One thing I figured out from Corporate America is that I like people, I like laughing and having co-workers, and I missed that energy, when I was working from my kitchen table when I started Bellamy Inspires,” he admitted.

As he did once before in his career, he jumped on Google; this time though, he searched ‘co-working in Charlotte’.

Among others, the results yielded Hygge. That was last November. Bellamy has been working from Hygge’s Remount Road location ever since.

“It’s become a habit to come to Remount now,” he shared. “It’s a quiet space unless we’re laughing or joking, and I love that I can use it 24 hours a day from everything to whiteboard sessions to meetings.”

The biggest advantage though?

“The best part of Hygge is being able to throw ideas off my coworking co-workers,” he said with a laugh. “I run ideas by Jaimie or Taylor all the time, and they do the same. We rely on each other a lot for that.”

Relying on each other for support and encouragement is another hallmark of Bellamy’s brand.

“My whole topic is fear, so we talk about fear a lot, but I also collect fears from people on notecards,” he noted. “I take them all, and I put them in a spreadsheet. If there’s one thing I’ve learned, it’s that we’re not only in our fears.”

He notes that when he asks the question ‘What’s the one thing that’s stopping you?’ he hears a lot of the same fears: fear of failure, fear of judgement or rejection, fear of not being good enough.

“As a culture, we sell the whole ‘overnight success’ thing a lot,” he admitted. “But people have to push through a lot of fears – some of the same fears – to get there.”

Learning from and supporting those who have pushed through fear is something that makes Bellamy Inspires special.

At every speaking engagement, he passes out black wristbands. On the inside, each band is inscribed with a simple, but powerful message: I am fearless.

“I wear mine 24 hours a day, and anytime I’m feeling fearful, I touch it,” Bellamy said. “When we touch the band, we can reveal things we’ve never revealed before because we tap into the energy of the band to push through it.”

Bellamy shares a collection of fearless band stories – participants who have reached out to him with gratitude for not only the band, but also the courage to push through the fear.

“Fearlessness isn’t the absence of fear,” he noted. “It’s feeling the fear and taking an action, anyway.” 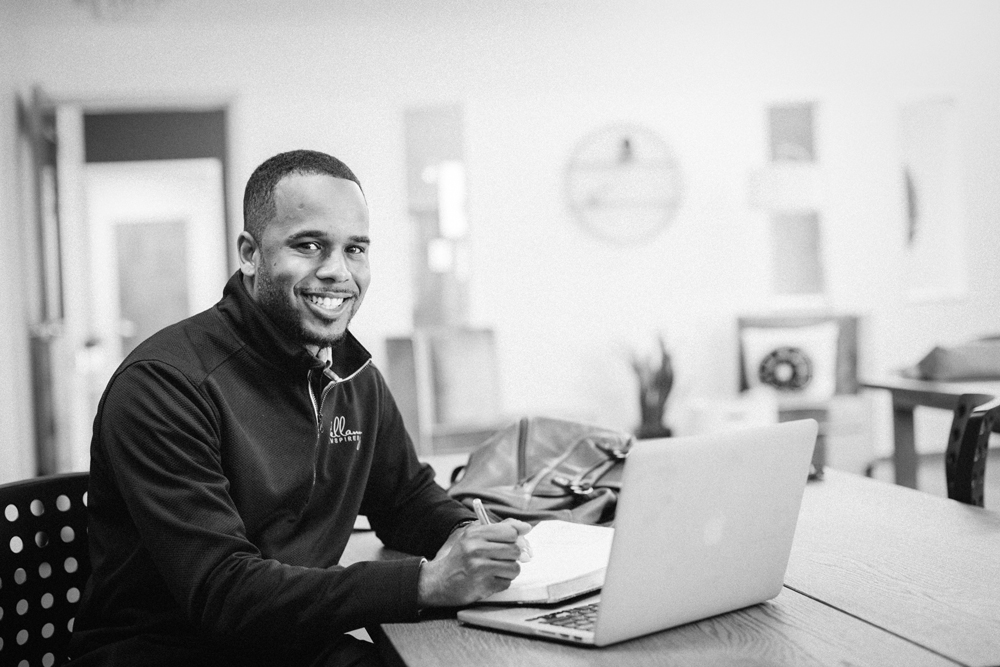 A Quick Reference Guide to Fear: But seriously – HOW do I push through fear?

Reframe it. “Yes, fear pushes us a lot of times; but think about reframing it in a fun way,” Bellamy shared. “This is what makes life fun – it’s the hard decisions we have to make that make life exciting.”

Take a small step. Instead of feeling like you need to take one, giant step, consider taking one, small step to push through a fear. “Those small steps will add up over time,” Bellamy explained. “You’ll eventually be able to say, ‘Now, I’m comfortable to do this.’ “

Manage it. “Again, it’s not denying fear – it’s always be there – it’s managing it,” Bellamy noted.